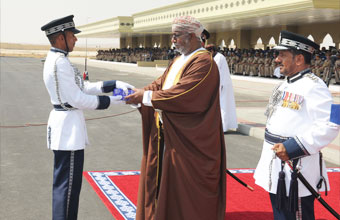 Royal Oman Police (ROP) celebrated today (Oct 20 , 2015) the opening of A’Duqm Police Compound and the graduation of squads of fresh policemen, under the auspices of Yahya bin Said al- Jabri, Chairman of the Special Economic Zone Authority of Duqm (SEZAD).
The ceremony began with the unveiling the commemorative plaque to mark the official opening of the compound. Chairman of SEZAD and the attendees followed the graduation ceremony of police recruit squads, after which the sponsor of the occasion handed over the excellence awards for outstanding graduates.
ROP camel corps presented various musical performances. The opening ceremony was concluded with a tour by the sponsor of the event to the A’Duqm ROP compound.
Lt. Gen Hassan bin Mohsen al- Shraiqi, Inspector General of Police and Customs, Dr. Ali bin Masoud al- Sunaidy, Minister of Commerce and Industry, Dr. Abdullah bin Nasser al- Harrasi, Chairman of Public Authority for Radio and Television, a number of honorable members of the State Council and, senior officers of ROP, the Sultan’s Armed Forces (SAF) and other security agencies, and sheikhs of the area