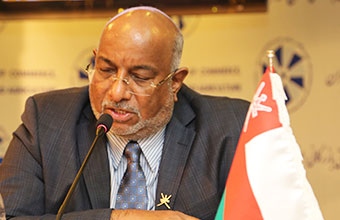 During the period from 27 September to 1 October 2015, the Special Economic Zone Authority Duqm (SEZAD) organized a promotional campaign under the theme (Duqm Invites You) in the Iranian capital Tehran with the participation of a number of government agencies and companies operating and investing in the special economic zone Duqm (Zone).

H.E. Yahya bin Said bin Abdullah Al-Jabri, SEZAD Chairman, commended the good relations between the Sultanate and Iran. In a speech delivered at a seminar held in Tehran Chamber of Commerce, Al-Jabri stated:

“The relationship between our countries as strategic partners has received a good attention from the public and private sectors in recent years. This interest would enhance our existing relationships as we look forward that our two peoples would take advantage of the geographical proximity and historical commonalities through the implementation of projects that would realize these objectives, help increase trade volumes and contribute to the prosperity of trade and investment.”

Al-Jabri noted the efforts of the Sultanate and Iran to promote trade exchange and promote trade and investment movement. He stressed at the same time that the Zone welcomes Iranian investments and provides support and assistance they may need.

He explained the Sultanate\'s efforts under the wise leadership of His Majesty Sultan Qaboos bin Said, may Allah protect him, to build a strong and stable economy. He elaborated that

“Sultanate of Oman has achieved growth rates that boosted its economic position among the countries of the region. The past few years have witnessed the implementation of a variety of infrastructure projects. The Sultanate has worked towards taking advantage of its geographical position in the construction of a variety of ports along the coast of Oman. It has also worked to take advantage of crude oil and natural gas in the construction of refineries and a number of petrochemical and heavy industry projects. The Sultanate exerts steady efforts to diversify its sources of national income and encourage the establishment of a strong and prosperous private sector. The Sultanate also focuses on providing the appropriate environment to attract various investments. During the past years, it has exerted great efforts in the development of foreign investment legislative framework to provide the chance to the companies to achieve good returns on their investments.”

H.E. Al-Jabri touched upon the incentives and facilities offered to investors in the Zone and said:

“The Special Economic Zone Duqm is the largest economic zone in the Middle East with an area of ​​up to (1745) square kilometers. The Sultanate established it recently as a part of its orientation towards diversifying the sources of national income away from reliance on oil as a major source of income.  We have been keen that the Zone would be variegated in its projects and investments. For this, it has eight sub-zones that provide many options for investors. Duqm Port, commissioned in 2013, is a multi-purpose port and has the potentials to accommodate industrial activities related to oil and gas and petrochemicals and the activities of import, export and re-export.”

SEZAD Chairman also confirmed the efforts of Oman Drydock Company in attracting many international companies to take advantage of ship repair services provided by the company.

For his part, H.E. Masoud Khansari, President of Tehran Chamber of Commerce stressed the importance for the two countries to strengthen their trade relations. In his statement during the seminar, he stated that

He pointed out that the recent period witnessed further trade cooperation between the two countries and that there is a direct flight linking Tehran and Muscat. He asserted that these factors help businesspeople in both countries to promote their trade and economic relations, noting that the mutual visits of economic delegations provide a good platform for businesspeople to meet and review possible areas of cooperation and partnerships among themselves.

Familiarization with Investment Climate in Oman

In the same vein, H.E. Ambassador Saud bin Ahmed Al-Barwani, Sultanate\'s ambassador to Tehran, invited Iranian businesspeople to familiarize themselves with the investment climate in the Sultanate and the investment opportunities available in the Special Economic Zone Duqm. Al-Barwani pointed out that the Zone system includes many encouraging privileges, such as allowing foreign ownership of 100%, tax exemptions for up to renewable 30 calendar years, and other incentives, in addition to the strategic location of the Sultanate and the geographical proximity between the two countries.

The promotional campaign included a number of presentation by the Public Authority for Investment Promotion and Export Development (Ithraa), the Ministry of Agriculture and Fisheries, Oman Drydock Company, Duqm Port Company, Oman Oil Company, Takamul Investment Company, and Central Utilities Company. There were also many bilateral meetings between representatives of the participating entities involved and Iranian businesspeople.