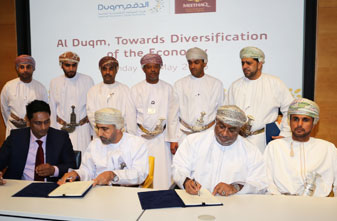 H.E. Yahya bin Said bin Abdullah Al Jabri, Chairman of special Economic Zone Authority at Duqm (SEZAD), signed today May 10, 2015 a usufruct agreement with Sebacic Oman Company which intends to set up a Sebacic Acid production plant at the Duqm Special Economic Zone (SEZD); Sebacic Acid is extracted from castor oil and is a part of many chemical industries including plastics and pharmaceuticals.

The investment cost of the project is approximately 24 million Omani Rials and it will be set up on 400 thousand square meters.
The ceremony witnessed the signing of partnership agreement between Sheikh Hilal bin Khalid Al Mawali as local investor and the foreign partner Pradeep Nair as well as the signing the financing agreement between Sebacic Oman and Meethaq Islamic Banking.
Ismail bin Ahmed Al Balushi, Deputy CEO of SEZAD said the signing of usufruct agreement for the implementation of a Sebacic acid production plant project, and the signing of financing and partnership agreements between the investors represent an additional step towards realizing the vision of SEZAD to become an important economic engine in realizing the Sultanate’s goals to diversify the sources of national income.
He also noted in his speech during the signing ceremony that this new industrial project, which is implemented by local and foreign investments is a culmination of the efforts that have been made over the past few months since our meeting in the Investment Opportunities Forum, which was held in June 2014. He explained that this plant would be the first of its kind in the Middle East, and the fact that this 62.7 Million USD project will create 450 employment opportunities in its first phase. The second phase, which is expected to begin during the next five years, shall witness an investment of approx. 250$ Million USD and provide 250 jobs bringing the total of employment opportunities to 700 jobs.
Additionally, Al Balushi stressed in his speech that the available investment opportunities at SEZD are numerous and diversified. The last few years witnessed the signing of many usufruct agreements with local and foreign companies. He also pointed out that having foreign investors contributes to the crystallization and improvement of local experiences, and promotes local capabilities to work in major projects such as those, which are currently being set up at SEZD.
Sheikh Hilal bin Khalid Al Malouli, the local partner in Oman Sebacic Company said that the aim of entering into such eco-friendly strategic projects has always been in our priority in this investment.
He also said in his speech during the signing ceremony, that the project would allow citizens to benefit by planting trees that produce the necessary feedstock in the Sultanate. He explained that the tree is known in the Sultanate for thousands of years as the “castor oil plant” and that its oil has many usages and that it is easy to plant in different areas. Al Mawali also confirmed the company’s commitment to purchasing the farmer’s produce, pointing out that the company has begun carrying out a study that aims to encourage local Omani farmers to grow this tree in a scientific way, especially in untapped agricultural areas.
Sulaiman Al Harthy, Group General Manager – Islamic Banking, said: “Against the backdrop of Oman’s strategic economic diversification programme and the emergence of Islamic financial services industry, Meethaq is proud to join hands with the Special Economic Zone at Duqm (SEZAD) to facilitate attractive investment opportunities for local and foreign investors. Meethaq recognises the immense investment prospects and potential that Duqm offers and is committed to supporting the strategic national initiative to develop Al Wusta Governorate and identify opportunities aimed at attracting investments in line with Oman\'s Vision 2020 economic blueprint.”